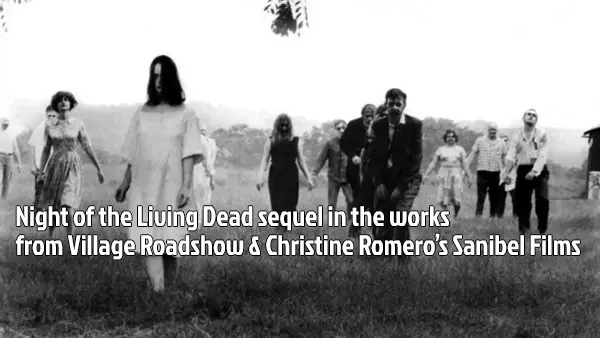 In a new Night of the Living Dead franchise, Village Roadshow Pictures have teamed together with Christine Romero and the late George A. Romero's Sanibel Films.

The sequel to the original 1968 Zombie classic will be written by LaToya Morgan and directed by Nikyatu Jusu.

The U.S. rights will be co-represented by CAA Media Finance and Village Roadshow Pictures. Film Nation will manage the project's international rights and present it to potential investors at AFM.

“The original version of Night of the Living Dead is still so resonant to this day,” said Jusu. “Every era has the zombie that it needs and right now, zombies reflect the ways that humans treat each other and show us who is truly the monster.”

Zombies are nothing new to LaToya Morgan, who was a writer-producer on The Walking Dead, calling the original Night of the Living Dead “one of the great cornerstones of the horror genre."
Morgan went on to say "I’m beyond thrilled to be playing in the sandbox that George Romero built and ecstatic to raise the stakes and push the envelope with this exciting new story.”

“I am so excited by this visionary team of storytellers that have come together to expand on the premise of the original film. Revisiting the world that George and his collaborators created is going to be a treat for fans. George would have been so happy to see this happen!” - Christine Romero.

Christine Romero is exercising the Night of the Living Dead sequel/remake rights given to Sanibel Films in a deal made by Image Ten during the planning of the 1990 remake.

This is the only legitimate Night of the Living Dead film project that is authorized by Image Ten.