Chapel from 'Night Of The Living Dead' added to Miniature Railroad 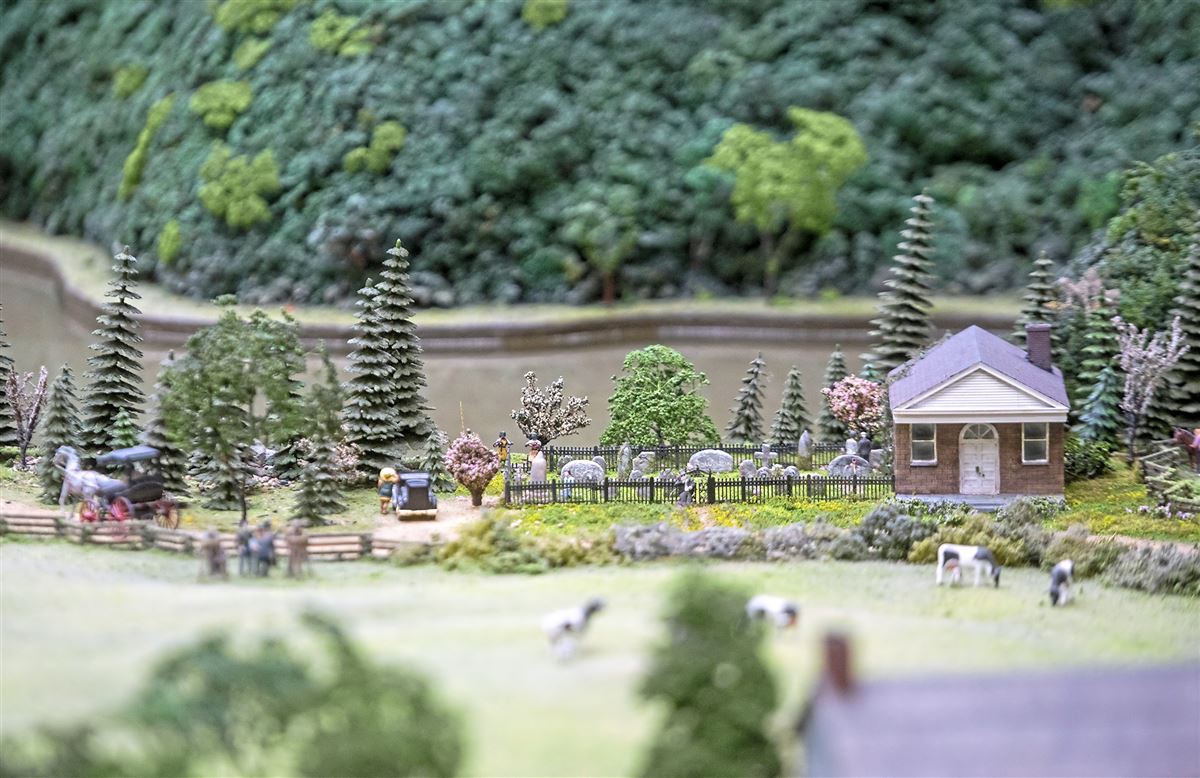 for the Pittsburgh Post-Gazette

The residents of the Carnegie Science Center’s Miniature Railroad and Village may want to consider investing in zombie insurance.

Every year, the Science Center adds a new piece to its Miniature Railroad and Village, which originated in 1919 and has been at the North Shore museum since 1992. Last year, it placed a tiny version of Gus and Yiayia’s famous North Side ice ball cart on the beloved Science Center fixture.

On Tuesday, the Science Center unveiled the miniature railroad’s latest addition: a replica of the Evans City chapel and surrounding cemetery as seen in George Romero’s 1968 zombie classic “Night of the Living Dead.” The model was installed Monday, revealed in a press conference Tuesday and will be on display to the public starting Wednesday.

“We just wanted to do something fun for Halloween, and we thought this would tie in nicely to the holidays,” Nikki Wilhelm, who manages the Miniature Railroad and Village, told the Post-Gazette. “We can keep it up year-round, so it’s not like it’s going to go away when October is over.”

Science Center exhibit technician Nino Balistrieri gets the credit for coming up with the idea for the new attraction. Though most of the miniature railroad’s models depict places or things from before 1940, Wilhelm said everyone agreed to make an exception here since the chapel was built in the 1920s.

It’s a fairly close approximation of the chapel and graveyard, right down to the tombstones, landscaping and shrubbery. Wilhelm said that the Science Center plans to add a few zombie figurines hanging out around the tombstones as a special Halloween treat. Usually, the Science Center waits until the holidays to reveal something like this, but the “Mars: The Next Giant Leap” exhibition opening in November made it logistically easier to start now.

The team behind the “Night of the Living Dead” model worked closely with the Evans City Historical Society to ensure the details on the chapel and cemetery are as accurate as possible. They were able to provide Wilhelm with a timeline of dates important to the chapel’s history and fun, slightly morbid facts about it — like how its cellar was used to store bodies during the winter when the ground was too frozen to dig graves.

“All of that was helpful because it demonstrates how important the chapel is to the community’s history,” Wilhelm said. “People are also just really excited about it, which is always a good thing.”

One of the folks most looking forward to seeing the finished product is Gary Streiner, a sound engineer for and one of the original investors on “Night of the Living Dead” who now serves on the board of Image Ten Inc., the production company handling the “Living Dead” franchise’s affairs. Streiner was the main figure spearheading the campaign that raised the $50,000 necessary to save and restore the chapel when it was in danger of being torn down about a decade ago.

Streiner is ecstatic about the “Night of the Living Dead” miniature railroad addition. He used to come to the Science Center with his parents as a kid and was mesmerized by the miniature railroad. Now, a film he and his brother, Russ — who played Johnny in “Night of the Living Dead” — worked on more than 50 years ago is being immortalized at one of his favorite childhood haunts.

“It’s as big of an American dream in my heart as was making the film in the first place,” he said. “It’s a continuation of the legacy that ‘Night of the Living Dead’ has brought to Pittsburgh and, in fact, the whole world.”

Streiner laughed when it was pointed out that he seemed incapable of talking about the model without using zombie terms. He described the endeavor as “the culmination of two bodies coming together and benefiting Pittsburgh” and praised the Science Center for all the “new, fresh blood” who may discover Romero’s work for the first time through the miniature railroad.

“As long as there’s a Carnegie Science Center, there will be ‘Night of the Living Dead’ representation there,” he said. “It doesn’t get any better than that.”

This model will immediately be in the running for spookiest section of the display along with other re-created locations like the Allegheny County Mortuary, which the Science Center added in 2013.

Wilhelm hopes this “Night of the Living Dead” tribute will help attract “maybe a different demographic” to the Science Center.

“I hope people are excited to learn a little bit more about Pittsburgh’s history and also understand that history doesn’t have to be boring things that no one remembers anymore,” she said. “This is a super popular movie that has a cult following.

“And also, who doesn’t love Halloween?”