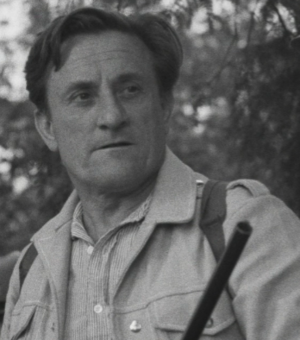 A Pittsburgh native, Vince started out working in the office of the E.M. Hill Lumber Co. During the Great Depression, he served with the Civilian Conservation Corps in Cook Forest, where he returned to frequently in later years.

"He would go up several times a year just to walk through the forest, He would take my Kids," Vince's Brother, Regis Survinski said.

During World War II, he served with the 630th Tank Destroyer Battalion and saw action in Europe, including the Battle of the Bulge.

After the war, he returned to work for the lumber company, but eventually announced he was going to quit and retire, his brother recalled, but ended up going into business for himself.

Vince owned and operated the Ardmore Roller Palace in Forest Hills for 17 years.

Vince also would compose songs. "it was mostly country-western," his brother said. "He has about 100 songs. but Ninety-nine percent of them aren't that good."

Vince would eventually get into the movie business in the 1960's

According to George, He and Vince met in the early 1960's after Vince had previously invested some money into a movie with a man from Germany, who turned out to be a con-man.

Not to be discouraged by that experience, Vince remained interested in the movie business and invested in Romero's South Side Studio, The Latent Image, who's primary focus at the time was shooting industrial films and commercials.

When making Night of the Living Dead, Vince was Production Director, But also helping in many aspects of making the movie, including raising money from other investors to get the film made.

"He liked working with Figures," said Vince's Brother Regis, who also worked on Night of the Living Dead. " He had a system for double- and triple-checking everything. Everything was marked and filed. When he wanted something, he knew exactly where to go to find it."

Vince also got the role in the film as the Posse Gunman that shoots Ben.

Romero recalled in an interview how Vince "had always complained about that", (Shooting Ben) "He said, 'I don't want to look like a bad guy.' He just wanted to make people happy. That's why he got into the movie business."

"Vince kept the company together, Much more than anyone else. We wouldn't have made it without this guy." Romero said. "He was there through thick and thin, He kept the company going through disaster and good times, He was there before we ever really took shape, He kicked money in and enabled us to get offices. He did everything for us.

Jack Russo recalls how he found Vince on the front porch of the farmhouse filling sheep intestines with water and wondered what was going on. "Turns out he was fattening them up so when the Ghouls bit into them they would look thick and chunky."

Before shooting started on Night, Vince would go to the farmhouse to clear out the mess.  "He and his brother cleared it out and made it livable. We were literally living in that farmhouse," says Romero. "Vince would go out and take a bath in the creek."

‍
Vince also worked as the Business Manager Dawn of the Dead (1978) and other George Romero Movies, There's Always Vanilla, The Crazies, Martin, Day of the Dead, Creepshow and Knightriders.
Vince passed away on May 7, 2001 in Pittsburgh, Pennsylvania, USA.