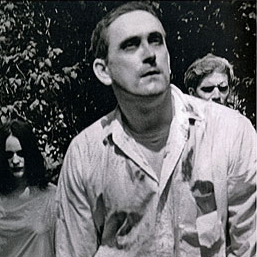 Regis was a proud Korean War veteran and an usher at St. Anne Church for decades.

He built and repaired electric motors and worked as a pyro technician for Zambelli Brothers.

Rege was the Brother of Vince Survinski, Production Director on Night of the Living Dead.

Vince had brought Rege in as an investor on NIGHT and with his background being a firework specialist, he also designed special effects with his good friend Tony Pantanella for the film.

Together they made the squibs for gunshots, bullet holes and explosions.

In an interview for Autopsy of the Dead, Rege recalls, when asked if he could do the truck explosion, he replied "Certainly, If Hollywood can do it, I can do it."

Rege and Tony had found an abandoned truck at an old mine, they used the truck to practice the explosion until they knew what to do.

For the film, Rege and Tony had filled the truck with bits of wood and carpet, a flash bomb and bottles filled with gasoline. when the bomb went off everything in the truck caught fire sending flaming wood and carpet through the air. The explosion worked out perfectly and was done in one take.

Aswell as playing a Ghoul in the movie, Rege can also be seen in Night of the Living Dead as one of the reporters in Washington DC, wearing sunglasses.

In following years Regis worked on other Romero films, he has credits on "The Crazies" for the special effects, but also had a role in the film as the Crazy Father setting fire to the house at the start of the film. In "Martin" he can be seen as a Hobo and "Season of the Witch" he is credited for the special effects.

Rege's Daughter Laura still has his Special Effects kit and recently brought it out to the Living Dead Festival in Evans City for display.