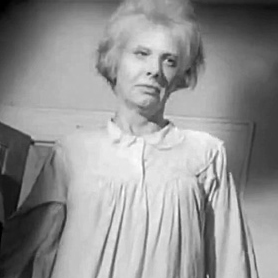 Josephine can be seen in Night of the Living Dead as a Ghoul in a long white gown. She appears in the gas pump scenes and also afterwards entering the farmhouse.

The Pontiac seen at the start of the movie belonged to Josephine. She had let Russ and his crew borrow her car for the scenes, but days after the initial shots had been filmed of the car arriving in the cemetery, another driver ran into Josephine's car, denting the front fender.

To fix the continuity in the film, the crew had to run the car into the tree in the cemetery, making it look like Barbra had caused the damage.

Josephine was a guest at the Living Dead Fest in 2011 and where she had fun meeting fans of the film.