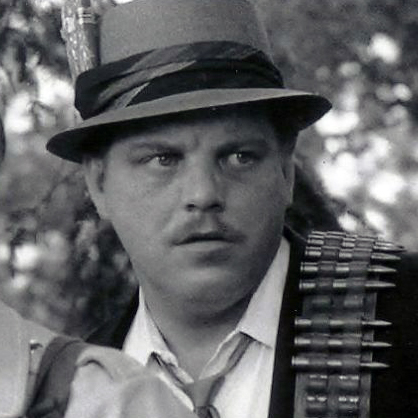 George "Kus" Kosana was an ex-Marine and an ex-steelworker from Clairton, PA. His interest in film led him to a degree in multimedia photography from the Art Institute of Pittsburgh.

In 1967 George was among a small group of second-round investors who put in $600 to help fund Night of the Living Dead, where he would also serve as production manager on the project and pitched in on many of the jobs that needed completing. Some of the taxidermized animals used in the film belonged to George Kosana, which were made by Charles Odato.

His long time friend John Russo, who recruited Kosana for the part, said his friend was a "natural" for the role of sheriff in Night of the Living Dead. "It seemed to fit his personality," Russo recalled, describing George as "cantankerous, amusing, blustery and sincere."

He starred along side Bill Cardille in Night of the Living Dead as the Sheriff, where he ad-libbed his most memorable line in the film: "Yeah, they're dead, They're all messed up".

Kosana also appeared in Romero’s There’s Always Vanilla (1971),  and in Russo’s The Booby Hatch (1976), but he considered his best role to be the condemned prisoner in The Devil and Sam Silverstein (1976), also a Pittsburgh made film Directed by Russ Streiner.

In 1982 George's screenplay "We'll Try Again" won him the Silver Award from the Houston International Film Festival, when the festival Director called it an "outstanding creative production".

In the 2016 film made by his long time friend John Russo, called " My Uncle John is a Zombie", George reprised and lampooned his role as Sheriff McClelland.

In the years since filming Night of the Living Dead, George had frequented Horror conventions with John Russo and other stars from the film, where they enjoyed meeting fans. George sold T-shirts with the famous quote, posed for photos, signed autographs and sold collectibles.

Sadly George died December 30th 2016, He was found in his home in Clairton, PA., after friends said he was not returning their calls. He was 81 years old.