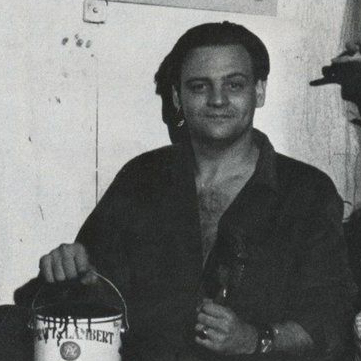 George Andrew Romero was Born February 4, 1940, in New York City in the Bronx.

His Parents were Ann and Jorge Romero.

George grew up watching movies like ‘The thing from another world’ and reading comics like the ‘Vault of Horror’ and ‘Tales from the Crypt’.

As a young boy, George watched Michael Powell’s film ‘Tales of Hoffmann’, this became George’s favourite film of all time, and he would credit this as the movie that made him want to make movies. George recalled in an Interview for Time how watching Tales of Hoffmann made him think about the process of making a film and realise the dream of making his own movies was reachable.

George had an uncle who had purchased an 8mm camera, he would allow George to use the camera, At the age of 14 George made his first film, ‘The Man from the Meteor’. While making the film, George was also arrested by New York Police for throwing a burning dummy off a tenement roof.

His mother Ann recalled how George would invite his friends over to watch his movie, selling tickets for 10 Cents, during the movie Ann would serve the kids refreshments.

For the school Science Fair Project George decided to make a film about Ecology for his project. The film earned him an award from the Future Scientists of America.

In 1957 George moved to Pittsburgh to study at Carnegie Melon University, He studied Design and had planned on becoming a commercial artist.

It was at here at Carnegie Melon University where George first met Rudy Ricci, who introduced him to other friends, Russ Streiner, Jack Russo and Richard Ricci

George got involved with a small theatre group and acted in a play called ‘The Connection’, The Dean of the department, Ted Hoffman, saw George in the play, He was so impressed with George’s performance that he encouraged George to transfer from the Painting and Design department into the theatre department, George realised this was something he really wanted to do and transferred.

One summer vacation in Maine, George and his cousins made another short film, using the family 8mm camera, called “Death in Small Doses” George starred in the film as an artist who was busy working on a drawing, when a bully destroys his crayons.

Plotting revenge George proceeds to hang a scythe from a tree, which he launches at the bully, stabbing him in the chest.

In 1958, George worked as a grip on the Alfred Hitchcock film ‘North by Northwest’ before returning to Pittsburgh to shoot his own films with his friend Rudolph Ricci.

Back in Pittsburgh, George, along with several of the friends he had met in college, decided to work together to make some money for groceries, together they started a commercial film company called the Latent Image, early work was for WQED and the Fred Rogers show segment called “Picture Picture”.

“How to make Lightbulbs” was one of these segments, along with "Mr. Rogers Gets a Tonsillectomy"

Working with the Latent Image making commercials was how George and his crew learned the basics of film making.

The Calgon Story commercial was a spoof of 'the Fantastic Voyage’, where a submarine was shrunk down in size to inspect clothing and the effect Calgon washing detergent had on the fabric.

In the late 1960’s George, Jack Russo and Richard Ricci were having lunch and talking about how fickle the advertising industry was when Russo said, “How about Ten of us get together and each of us kick in $600 bucks?” With the idea that they should be able to make a movie with the budget.

The group had seen the rubber monsters from the 50’s and thought If Bill Cardille’s ‘Chiller Theatre’ show was buying low budget ‘B’ movies like ‘Attack of the Crab Monsters’ they should be able to do better.

According to Russo, George got so excited at the prospect, he slammed his hand down on the table as he proclaimed “We’re gonna make a movie!”.

Ten of the friends did invest $600 each of their own cash, to get the ball rolling on a feature film and formed the company Image Ten, eventually producing ‘Night of the Living Dead’. These Investors included Karl Hardman and Marilyn Eastman who operated their own Recording Studio, Hardman associates in Downtown Pittsburgh.

According to George, he and the group put their names in a hat to see who would direct the film, George pulled his name out as Director.

The film was made with the help of friends and family, work associates of the Latent image, many of whom played Ghouls in the film.

The success of Night of the Living Dead allowed George to make several more films in the early 1970’s with the help of many of the crew who had worked at the Latent Image, these included 'There’s always Vanilla', 'Season of the Witch' and 'The Crazies'.

George’s first wife was Nancy, she had previously worked as an account supervisor at Ketchum, MacLeod and Grove Inc

In April of 1970, Nancy Romero became the Vice President of Marketing and sales at the Latent Image Inc, Nancy was credited on Season of the Witch as producer Nancy M. Romero.

While filming Season of the Witch, the production needed a house with many doorways. Gary Streiner worked with George at the Latent Image, He mentioned a family that he was friends with and how their house would fit the requirements. The house was owned by the Forrest Family, who welcomed the production. Ingeborg Forrest, who the house belonged to, mentioned to George Romero that she had a daughter who was an actress, living in New York, Romero said he might give her a call one day.

Ingeborg’s Daughter turned out to be Christine Forrest, the two eventually would be married.

in the mid 1970’s at a screening of The Crazies George met Richard Rubinstein, together they would team up and form Laurel Entertainment, they made a series of sports documentaries called ‘the Winners’. George also directed the TV documentary “O.J. Simpson: Juice on the Loose” but, George wanted to make movies.

In 1978 Romero wrote and directed Martin, the story of a young man who might be a Vampire. One of the characters in the movie is Christina, a role George wrote for the girl he was dating at the time, Christine Forrest, who would eventually become Romero’s 2nd wife in 1980. The Film also had roles for Christine’s Mother Ingeborg Forrest and Father J. Clifford Forrest Jr.

Martin was shown at the Sundance Film Festival, where some big studio executives from Warner Brothers saw the film. Warner Brothers had recently acquired the rights to Stephen King’s novel ‘Salem's Lot’ and thought George would be a great choice to direct that Vampire movie too.

Warner Brothers flew George and his family out to meet Stephen King in Maine where the two discussed making the film. Warner Brothers would eventually decide to make Salem’s Lot as a TV Movie, Without George as the director,however, Stephen and George got along very well and the two become life long friends. This friendship would lead to the two collaborating for the movie ‘Creepshow’, but before that film, Romero returned to the Zombies with Dawn of the Dead.

For many years George had resisted the calls to make a sequel to Night of the Living Dead, He didn’t want to do it unless the film had something to say.

George happened to be friends with Mark E. Mason of the Oxford Development Company, who had opened the Monroeville Mall, the first large indoor Mall in Pittsburgh. Mason who co-owns the complex invited George out fora private tour of the mall.

On the visit George he was told by Mason about the rooms above the mall that incorporated its own Civil Defence area, and how they could be used as the perfect shelter in case of a national emergency. George, realising survivors could hide out in the upstairs of the mall, with everything they needed right under their feet, was Intrigued by the idea and started thinking of how this could be implemented into his next Living Dead movie.

while working on the idea, George got a phone call from Dario Argento, asking if he wanted to make a sequel to Night.

He told Dario that he did have an idea, Argento sent George airline tickets to fly out to visit him in Rome, where George would write the script for Dawn of the Dead.

Dawn of the Dead went on to gross more than $55 million.

Romero later went on to write “Day of the Dead, the apparent conclusion to the ‘Living Dead’ trilogy which emerged as one Romero’s strongest horror films to date.

Romero worked on several other projects outside of the'Dead' series, including collaborations with a couple of other legends of the horror genre, directing the Stephen King-penned series ‘Creepshow’ in the 1980s and co-directing the 1990 horror film Two Evil Eyes with Dario Argento.

Romero’s other films include: ‘Knightriders’, ‘Monkey Shines: An Experiment in Fear,’ and ‘Bruiser’.

also worked in television as the creator, co-executive producer and occasional writer of ‘Tales from the Dark Side.’  Romero teamed up with Stephen King again for his adaptation of King’s novel, ‘The Dark Half.’

In 2004, George would return to the zombie genre that he had started in 1968. working on Land of the Dead he met Suzanne Desrocher.

Suzanne noticed George while tending a bar in Toronto, a friend of hers introduced them both, eventually Romero asked Suzanne out for dinner to which she agreed. In an interview from thefilmstage.com Suzanne recalls how the second time they got together was another great evening and she never looked back. She wasn’t a horror fan but felt they had everything in common. Speaking of George she said, “He changed my life, George asked me to take a chance on him and I did”, the couple would marry five years later.

Through the years George had travelled the world to various Horror conventions and film festivals where fans would line up for hours to meet him. George always stayed until every single fan had the chance to say hi. He would spend hours talking with fans, signing autographs, taking photos and shaking hands.

He is survived by his third wife, Suzanne, and by three children, Tina, Andrew and Cameron.

On October 26, 2017, George A. Romero was honoured by the Hollywood Chamber of Commerce, when the 2,621st star was placed on the Hollywood Walk of Fame in his name.

Since his death, George Romero’s legacy has lived on, with an everlasting mark on Horror movies and filmmaking, the George A. Romero Foundation is now dedicated to honouring his life, work and cultural influence. With his wife Suzanne Desrocher-Romero as founder and President, the George A Romero Foundation can support a new generation of filmmakers and artists in his memory.

There is so much more to add to this page about George Romero and his life, Image Ten will continue to update with more information periodically.

As George would say,