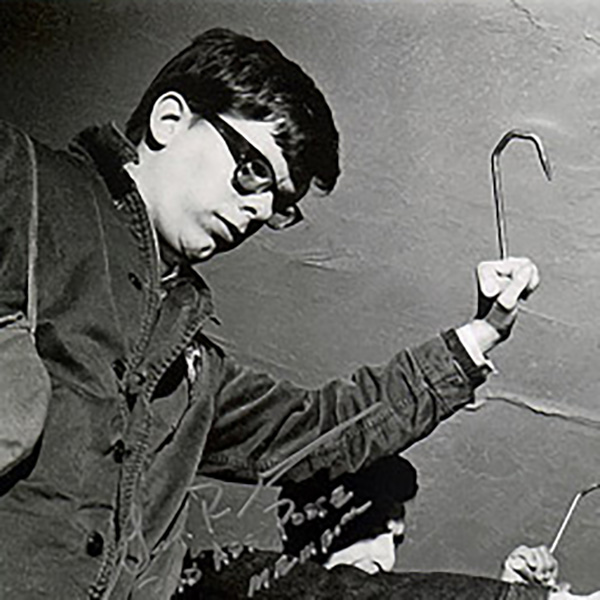 Gary Streiner is the Younger brother of Russ Streiner, He worked as a Sound Engineer on Night of the Living Dead, but also did multiple other jobs on the set when needed.

One of Gary's other tasks on set was to start the fire burning on the chair Duane kicks down the front porch.

In between the multiple takes, Gary had been checking to making sure the fire was out completely, but failed to notice a still burning ember before he poured gasoline onto the chair.

The gasoline instantly lit up as Gary was pouring, causing him to throw his arm up in the air and the burning gasoline to run up his arm and onto his clothes.

Gary set off running when Bill Hinzman quickly ran to Gary's aide and tackled him to the floor to put out the fire. He did suffer some injuries from the accident, but luckily he was not badly burned.

Gary can be seen as one of the Posse members who drag the dead out of the house with a hook as the credits start to roll. One of the publicity stills used for the USA Lobby Cards set also features Gary standing at the Farmhouse door.

In 2008 Gary started the Living Dead Fest in Evans City, the event was dedicated to Night of the Living Dead, with some of Nights cast and crew on hand to meet fans.

With with the help of the Night of the Living Dead fans, Gary raised the $50,000 needed to stop the demolition, and restore the chapel, preserving it for fans and future generations.

In 2014 George Romero was a guest at the Living Dead Fest, and cut the ribbon on the beautifully restored Evans City Cemetery chapel.

Besides being an original member of the production team that made Night of the Living Dead, Gary is the driving force behind bringing back the film in it's restored new format.