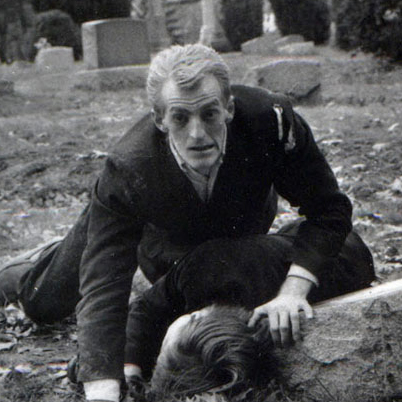 Bill was a 1955 Graduate of Coraopolis High School, A member of the Coraopolis Sportsman’s Club and the U.S Navy reserves.

In School Bill developed an interest in still photography and offered his services in his neighbourhood, taking photos of families and for the local newspaper.

While working at a steel mill, Bill advanced his photography skills by attending the New York Institute of Photography. He then went on to work for Warren Associates in Pittsburgh making Photographs, before moving to the Latent Image where he Met George Romero and Russ Streiner.

Bill worked at the Latent Image for some time before he left to do freelance work as a still photographer and shoot TV commercials, when he got a call from Russ Streiner, saying they were going to produce a feature film. He was asked if he wanted to invest some money in the project and work on the movie.

After buying some shares in the project, he started working on the set, helping with the lighting and camerawork.

At one point in the production, Bill was asked to bring an old suit so he could be in the scenes shot around the Farmhouse, as there was a shortage of people to play the Ghouls.

Some of the last scenes to be filmed were in the Cemetery, Bill thought he was done filming when he got a call from George, asking if he wanted to play the part of the Graveyard Ghoul, telling Bill "his looks fit the part".

As a result, Bill became the first Ghoul seen on screen in Night of the Living Dead and the first ever Flesh-Eating Zombie, He became known by fans around the world as Zombie #1.

On the set Gary Streiner accidentally set fire to his own arm, when pouring gasoline onto a chair Ben kicks from the porch, as Gary set of running in a panic, Bill was standing close enough to tackle him to the ground, put the fire out and stop Gary from being more seriously injured.

Hinzman later directed the films The Majorettes (1986) and FleshEater (1988). In Flesheater, which he also scripted, Bill reprised his role as the Graveyard Ghoul. When filming the infamous heart munching scene in Flesheater he was unaware that the heart was areal pigs heart and bit into it thinking it was a fake edible heart.

If you look close you can almost see the disgust in his face as he munches down and realizes it's not what he expected. He kept on acting to not ruin the take.

His final role was in River of Darkness, where he played a lead role alongside pro wrestlers Kurt Angle, Kevin Nash and Sid Eudy.

Over the years Bill could be found as a guest attending horror conventions. He would often dress in full character as the famous Graveyard Ghoul Cemetery Zombie allowing fans to pose for photos with him.

Sadly, Bill passed away peacefully on Sunday, February 5, 2012, in his home surrounded by his family.

Bill was cremated as he had asked, “He always joked with me that if he got buried, he would come back.” said His Daughter Heidi.

Beloved Husband to Bonita “Bonnie” Hinzman, Loving father of Heidi Hinzman and the late S. William Hinzman; a loving family member and friend to many more.