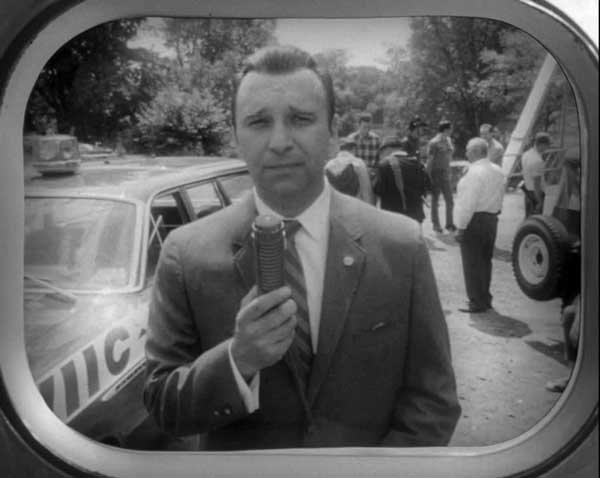 Mr. Cardille began acting as a child, participating in Vaudeville shows with his father in the 1940s.

He graduated from Sharon High School in Sharon, Mercer County, and earned a basketball scholarship to what is now Indiana University of Pennsylvania, where he hosted his first live radio show on WDAD Radio while he was a student.

Shortly after graduation, he began working at WICU in Erie, where part of his job involved hosting a Saturday spelling bee, then doing commercials for Erie Brewing during half-inning breaks of Cleveland Indians games.

“I don’t drink,” he recalled, “and in those days, you could drink beer on the air ...the company sent me a case a week and the engineers would drink it.”

He pretended to take a sip during the commercial “and then I’d pour mine down the sewer. They were the happiest rats in Erie.”

While working in the Television community in Erie, Bill met his wife Louise, “We were at a night club and I asked her to dance. She said no” laughs Cardille. Bill was persuaded to ask her to dance again two weeks later. “We’ve been dancing together ever since.” Said Bill.

He and Louise,returned to Pittsburgh on Labor Day weekend, 1957. He’d been offered a management position in Erie but turned it down, convinced his future was in Pittsburgh as a director and announcer.

From there, he did everything at the station, both in front of and behind the camera, all while demonstrating an incredible ability to harness the new medium in inventive and effective ways.

“He was a terrific mind that was ahead of his time,” Carter said. “He took advantage of this intimate piece of technology that was in our homes and brought us together and connected us.

“He figured out that he could use that technology to create something special, and what was special was his 60-year bond with the population. How extraordinary.”

In the early years, Bill was soon hosting several diverse shows including “Luncheon at the Ones” and the “Saturday Dance Party”

Around 1961 Bill began hosting the popular live “Studio Wrestling” Saturday nights on Channel 11, quickly gaining a reputation as a wrestling play-by-play man, this led to Bill working on the nationally syndicated World-Wide [now World]Wrestling Federation from 1969 to 1975 for the late Vince McMahon Sr.

Studio Wrestling Alumnus Frank Holtz remembers Bill announcing on the show, “there’s a lot of times when the wrestlers are on the mat and not doing anything, when the announcer needs to fill in, Bill knew when to talk.” Holtz said.  ”He had the ability to highlight people who weren’t that interesting, and how to explain what was happening so that anyone could understand it.”

Studio Wrestling came to an end in 1974, when new WIIC-TV program director David Chase, first moved the show to 1 p.m., then removed it altogether.

Bill also famously hosted “Chiller Theater,” which aired Saturdays from 1964 to 1983, he won the collective hearts of Pittsburghers with the tongue-in-cheek manner in which he surrounded himself with fictitious monsters, beasts and other oddities.

“I thought Chiller would last about 13 weeks because at that time the science fiction type movies weren’t very popular or strong.” Said Cardille. “However, we helped create a lot of interest and we helped evolve a trend which other (TV) markets picked up. ‘Chiller’ has evolved from where I came in and threw some switches on cameras to the current laboratory background and character sketches.”

Chiller Theatre movies included “The Brain from Planet Arous”, “Curse of the faceless Man” and “Invasion of the Saucer Men”.

Mr. Cardille's transition from “Studio Wrestling” to “Chiller Theater” under scored his ability to reinvent himself with great success throughout his career. The show was so popular that Channel 11 became one of the last NBC affiliates to air “Saturday Night Live” live. For years, the station delayed the comedy show until 1 a.m., after “Chiller Theater” ended.

But Bill’s son-in-law, Jim Rogal, said the nickname was misleading in a way, instead describing his father-in-law as the “warmest guy” he'd ever met.

“I think of him more as just a humanist than an entertainer,” he said. “He liked people.He liked being around them and making them feel good.”

“I came to learn that Bill was loved for a reason,” Rogal said. “He was an incredibly kind, sweet, genuine man, and he had this remarkable enthusiasm for life.People felt it. They even felt it through the screen.”

In 1965 Bill hosted “Mysteries Beyond” on Channel 11, a psychic phenomenon show dealing with “Anything that’s unusual” Cardille said. “We want both experts in the field and the man on the street. You know,the waiter who had a weird experience in the service, the housewife who lives in a haunted house, the pilot who can tell us what UFO’s look like because he saw them and the guy who communicates with the spirit world – and it answers back.”

In 1967 Mr. Cardille helped raise money for “Night of the Living Dead” and had a starring role in the film. “We were upstarts trying to make a little horror film and he basically plugged us almost every week,” Mr. Romero said. “He was an incredible supporter — I really give Bill a large part of the credit for me being here at all.”

From his work in Radio and Television, Bill had become friends with Karl Hardman. Karl told Bill about the 'Monster Movie' Image Ten were producing.  Bill initially said to Karl he would not have time to be in the film, due to his busy work schedule, but he did promote the film in his role on “Chiller Theater”.

After multiple calls to Bill, Karl’s persistence finally paid off. Bill got the station to do a news promotion for the movie, giving him the opportunity to visit the set with fellow reporter Dave James.

While on the set George and Russ asked Bill to return to film a scene where he would portray himself, reporting the news about the undead ghouls on WIIC-TV Channel 11 news,to which he agreed.

Bill later reprised his role in the 1990 Night of the Living Dead remake as the news reporter, alongside the cameraman who starred with him in the original film, Steve Hutsko.

He also joined many other Night of the Living Dead Cast and crew at Horror Conventions, where he would meet fans of the movie, including the 2014 Living Dead Festival in Evans City. Bill did a talk about his time on the set, with his on screen companion, George Kosana, both back at the Bridge location where the two filmed their scene years earlier.

Bill later returned to radio as a DJ on Pittsburgh stations, while doing television,concluding his career with WJAS in 2015 when the station was sold.

Following his 2015 retirement, Mr. Cardille was diagnosed with liver cancer.

“He felt at peace and that he had a great life,” said his Daughter Lori. “He was very content.”

Wrestler Bruno Sammartino was Cardille’s friend for more than 50 years.

“I’m going to tell you something,” said Sammartino. “Nobody was better than Bill.This guy could do everything. I love him like a brother. You can’t help it.”

Ron Jaye was on the anchor desk with Bill in the early 1990’s.

“He was a delight to be around,” said Jaye. “Anytime people were around him, they tended to be happy. He’d walk in a room and everyone was happy. That was Bill Cardille.”

Ray Carter, WPXI general manager. “He is the fabric through all these decades. Sixty years of our history.”

Pittsburgh knew him best as “Chilly Billy”, the late-night host of Chiller Theater, who got families to stay up late on Saturday nights.

He would scare them with horror flicks and color commentary, always having a good time.

“I admire him as a husband, and father,” said Carter. “When he gave back to the community, volunteered more hours than anybody in the history of this city.”